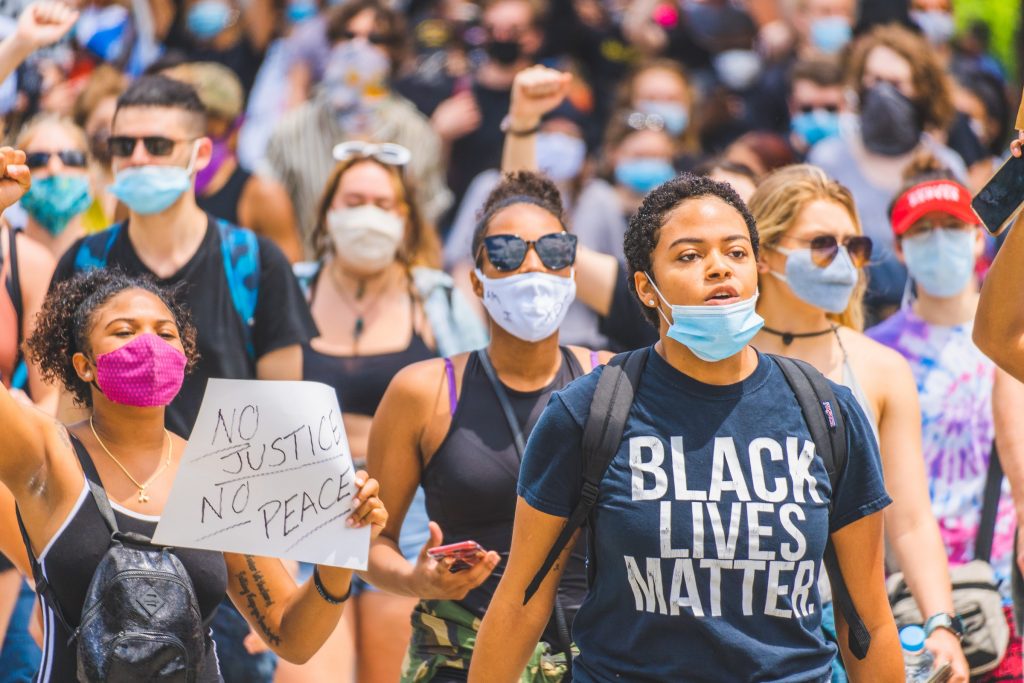 I’ve been trying to write a new blog post for several weeks now, and just when I think I’ve found something meaningful to say about media literacy in light of recent events, everything changes.  In the midst of the coronavirus pandemic and its accompanying “infodemic” of disinformation, the horrifying and unexplainable murder of George Floyd and the resulting widespread protests have finally – and I hope irrevocably – focused the nation’s attention on the scourge of institutional racism.  So while I’ve written lots of blogs about the importance and usefulness of media literacy in K-12 and higher education, this time it’s different.

For those of us who remember what it was like in 1968-1970, the current situation might seem achingly familiar: thousands of peaceful protestors taking on the defining issues of our time, coming face to face with police officers, soldiers and National Guard members committing violent actions against them.  But it’s different this time.  We don’t just see those images once a day on the nightly news – social media have completely changed the dynamic, in ways that are both powerful and distressing.  We watched as that police officer killed George Floyd, he and the other officers callously ignoring George’s pleas and those from the bystanders surrounding them.  We watched as police officers in Buffalo shoved a 75-year-old man to the ground, and then callously ignored him as he lay there bleeding.  We watched as peaceful protestors exercising their first amendment right of assembly were disbursed with gas and rubber bullets to make way for a photo op by the President.  In part because of the changes in who controls the information and the images we see, this time it’s different.

And for me, personally, it’s different this time.  In 1968 I was a 14-year-old from an entirely Republican white family, going to a nearly all-white high school in the suburbs of Cleveland.  While my parents, ministers and many of my teachers had stressed the importance of equality and anti-racism, I had virtually no experience with diverse populations or the personal lives of people of color beyond the news and the rare portrayals I saw on television and in movies. While I came of age during the Civil Rights movement, the women’s movement, Vietnam War protests, and Kent State, I didn’t really see or understand the depth of institutional racism in our country.  With my white privilege blinding me to the realities faced by so many others, I didn’t even understand the questions, much less answers.

I still have a long way to go – but it’s different now.  I’ve spent my adult lifetime immersing myself in literature and films about racism, exploring theories and personal histories that gave me a glimpse into the experiences I never had.  I teach about white privilege and stereotype threat in my developmental psychology classes.  I speak and teach about media literacy every day, raising questions about how we know what we know about the world, about whose stories are told and whose are not told, about becoming aware of our own biases in the ways we perceive, interpret and share information.

It’s different now because I’m the mother of a daughter born in Peru, a son-in-law who is black, and three incredible grandchildren who are Peruvian African American. We shared a household for several years, and they taught me to see and experience things differently.  It’s personal now.  It’s my grandson, my granddaughters, my son-in-law. It’s having “the talk” and Driving While Black and the heartbreaking cries of “I can’t breathe” that have become part of my own lived experience.  Even though we live in the very liberal community of Ithaca, my family has faced instances of direct racism, including treatment by the court system and the police.

So while it’s different this time, the basic skills and approaches found in media literacy education are more important than ever before.  All of us need to be able to think critically about messages we see, hear and read in the media.  We need to be able to reflect on the impact of media messages on ourselves, on the lives of people who are similar to and different from us, on our communities and the democratic process.  And we need to be able to use media in many different formats to communicate what we see and think about, to make a difference in the world going forward.

At Project Look Sharp we have a long history of using media literacy approaches – especially our constructivist media decoding (CMD) pedagogy – to explore and question media messages about race, racism and protest.  Our Media Constructions of Social Justice curriculum kit has entire unit on Black Freedom/Civil Rights, including one lesson that deals directly with Challenging White Supremacy by exploring both violent and nonviolent methods of protest using 14 different types of media.  We have lessons that explore issues of racism in the context of politics – from the 1860s through the election of 2016.  One of our recent lessons for elementary grades uses children’s books to explore messages about Harriet Tubman, enslavement and the Underground Railroad.  Another recent lesson at the high school and college level involves three commentaries concerning Teaching about Slavery, while a third explores the links between Black Lives Matter and Climate Change.

And now, in addition to our new set of media literacy lessons related to COVID-19, we have two new powerful lessons that look at media coverage of the current protests in the U.S. about racism and police brutality.  Covering Black Lives Matter focuses on news coverage of the protests on May 31 and June 1, comparing the front pages of 10 newspapers from the U.S. and other countries.  Presidential Photo-Op and Political Protest: Who’s Telling the Story? asks students to analyze and compare two videos about President Trump’s photo-op in front of St. John’s Episcopal Church on June 1, 2020 – one produced by the White House, and one from a longer news report on MSNBC.

During the coming months, we’ll continue to look for media content to use in new lessons, including a slate of lessons related to the 2020 presidential election campaign.  Please continue to explore our free resources – that now include more than 500 lessons – all grant-funded which allows us to make them available at no charge for educators.  And please let us know if you have other suggestions or feedback on how Project Look Sharp can support educators to prepare students for new ways of learning in today’s challenging world.

Because it’s different this time.