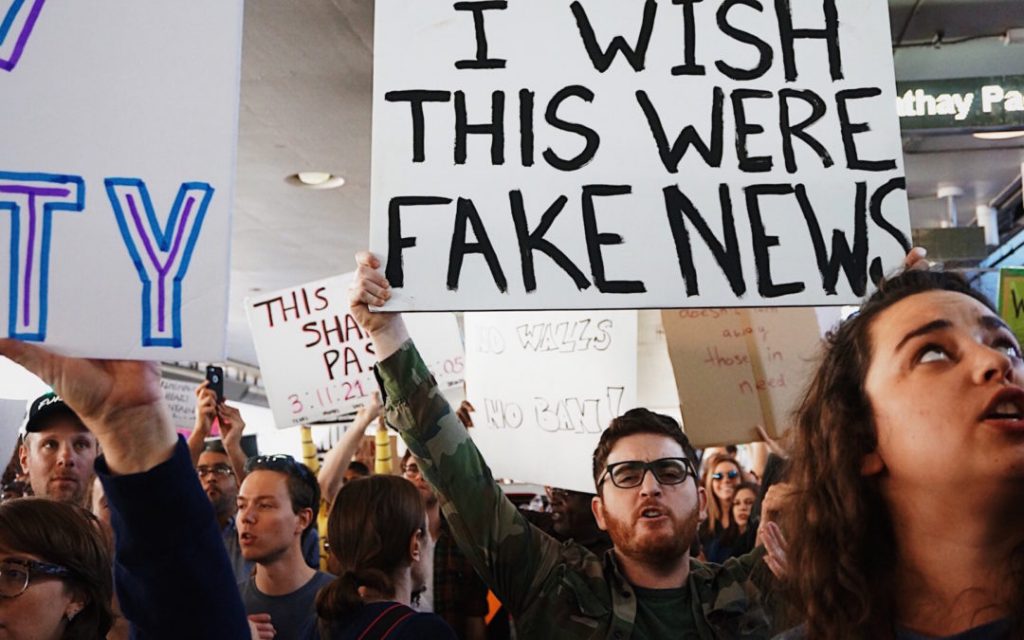 Reflecting on the mediascape since the 2016 elections, it’s tempting to think that “fake news” is strictly a twenty-first century phenomenon—designed by webmasters as clickbait for shadowy networks seeking power and profit.

This article will explore some ways in which teachers can use the analytical tools of news literacy to unearth the processes of fabrication, omission and distortion, which have characterized news reporting since the founding of the republic.

We’ll examine historical and contemporary examples of old and new media forms that teach students to evaluate credibility, critique evidence, and analyze bias as they seek to become digitally literate citizens in a media world in which they are constantly buffeted by confusing and distracting messages.

Throughout this article, we’ll use examples from Project Look Sharp’s collection of over 1,000 free online lessons, which were designed to teach core content in the social studies by using media documents paired with questions in an interactive process that supports student capacities to develop habits of media inquiry. All lessons can be accessed by searching titles, keywords, themes, C3 standards, or grade level subject here.

The Manufacture of Alternate Truths

In 1964, Malcolm X participated in an Oxford Union Debate where he spoke about the ways in which news media constructions can be used to sway public perceptions in the interests of the producer:

“When the people who are in power want to … create an image to justify something that’s bad, they use the press, and they’ll use the press to create a humanitarian image for a devil, or a devil image for a humanitarian. They’ll take a person who’s the victim of the crime and make it appear he’s the criminal, and they’ll take the criminal and make it appear that he’s the victim of the crime.… Now there was a time when the dark world, people with dark skin, would believe anything that they saw in the papers that originated in Europe. But today, no matter what is put in the paper, they stop and look at it two or three times and try and figure out what is the motive of the writer. And usually they can determine what the motive of the writer is.”

In this speech Malcolm is introducing one of the key concepts in media literacy—that all media messages are constructed. This invites the accompanying question of how we define “the media” or “the press” as Malcolm named it. As teachers, we can draw on a rich array of media sources to help students analyze how “the news” quickly translates into “history.” What appears in Facebook, Twitter or blog posts today will likely end up in Wikipedia, textbooks, and research papers tomorrow.

Beginning a class with debates about contemporary political topics and pronouncements can easily lead to a runaway train of accusations and return volleys. Analyzing media such as history texts for bias is one way to invite students to exercise critical thinking skills without adding the challenge of sparking polarized personal opinions on contemporary issues.

In the Project Look Sharp lesson, “Arguing for Freedom,” students read two brief history textbook excerpts written in the decades after John Brown’s raid on the Harper’s Ferry arsenal, analyzing the very different messages about the man as presented during and after the Reconstruction era. The 1872 text describes Brown as a determined patriot while the 1890 text describes him as a rash and inflammatory invader.

We can assist students in deepening their awareness of media constructions by asking, as Malcolm X does, “Who made this and for what purpose?” As media literacy educators, we always want to ask, “Where do you see evidence in the document?” As history teachers, we can further ask, “How might the historical contexts at the time of the texts’ writing have influenced the different interpretations?” and “How do textbooks reflect the prevailing sentiments of those in power at the time of publication?”

In examining the many forms of “fake news” constructions, we must explore fabricated content—content that is completely false and designed to deceive and to damage. Recent studies affirm that hoaxes can spread rapidly, especially via social media channels in which people segregate themselves into separate networks that fail to provide alternate perspectives.2  These restricted information channels reinforce confirmation bias, which leads us to validate or reject evidence in order to confirm our existing beliefs.

How can teachers invite a thorough and rigorous analysis of the role media forms play in supporting or challenging the spread of viral rumors masquerading as truth? …

*This article was published in the Sept. 2018 issue of “Social Education.” It goes on to cover several lessons that demonstrate how teachers can train students to go beyond viral messages and ask questions about all media messages, not just those with which they may disagree.